Posted by expresstractorpulling.com at 23:18 No comments:

We've been busy during the 2013 pulling season with a number of things from tinkering about to dealing with major disasters and have found little time to update our blog, but now the 2013 pulling season is over we thought we had better get back to it with some info on our progress. So stick with us and we'll try to keep you informed.

Data - The need to know

Now, having got through our second year, we're still pretty new to this sport and we have a lot to learn. With that said, a long and rocky road ahead seemed a bit daunting at first but then we got to thinking perhaps we'll try to shorten it, but how? So, instead of accumulating a vast quantity of knackered turbos and melted components, which apparently seems the tried and tested road to success, we thought we would take a look at some facts and figures instead. Now don't get us wrong here, we are not scientists and this isn't exactly formula one racing, but we're not scrap dealers either, so we added a data logger with a digital display screen.


Now, this is all very well and good having this bit of wizardry but once we've collected our data what do we do with it? Well we decided to begin with the 'Ladybird' book of how an engine works and let it progress from there.
The addition of the data logger has given us the right information for us to correct our air to fuel ratio, increase our turbo size, lower our temperatures and provided us with diagnostic information when things go wrong. A worthwhile bit of kit.

As we found out, there's a bit more to fitting gadgets than just sticking them on and Bluebird's electrical system was in need of an upgrade.
A new electrical system was engineered specifically to handle the new data sensors and electrical components, giving more reliability and data integrity. The new system was housed in the original fuel tank to keep everything dry with various plug-in components to make replacement quick and easy.

We thought we would give the throttle lever a bit of a tweek too, mainly just for comfort.
The exhaust also got re-jigged amongst other things.﻿
﻿
﻿
Posted by expresstractorpulling.com at 15:03 No comments:

﻿
The 2012 pulling season, apart from being the wettest on record, was a brilliant start for the Bluebird Express team as we gained second place overall in the UK Pro-Pullers Championship!
But after a couple of months of hard financial saving it was time to see how the 2012 season had taken it's toll on Bluebird Express.

Bluebird gets undressed.
This engine didn't look like it was going to see us through the 2013 season, so another engine block needed to be sourced.

We found a 380cui block to replace last years 360cui.
And thanks to Richard at Billcar Precision Engineering Ltd for all his help.
Whilst the engine was out we cleaned and painted the chassis.

We thought we would have a go at a new manifold to relocate the new bigger turbo. So we began by CAD drawing and profiling our own new face plate and flanges.
The sharp eyed amongst you will also notice the new aluminium Kirkey seat!

We'll be back soon in Bluebird Express - Naked! Part II, with a few more modifications including some data logging gear.

﻿
Posted by expresstractorpulling.com at 00:37 No comments:


We've been busy this winter giving our Bluebird Express a bit of a facelift. So, fresh from the barn, here she is. 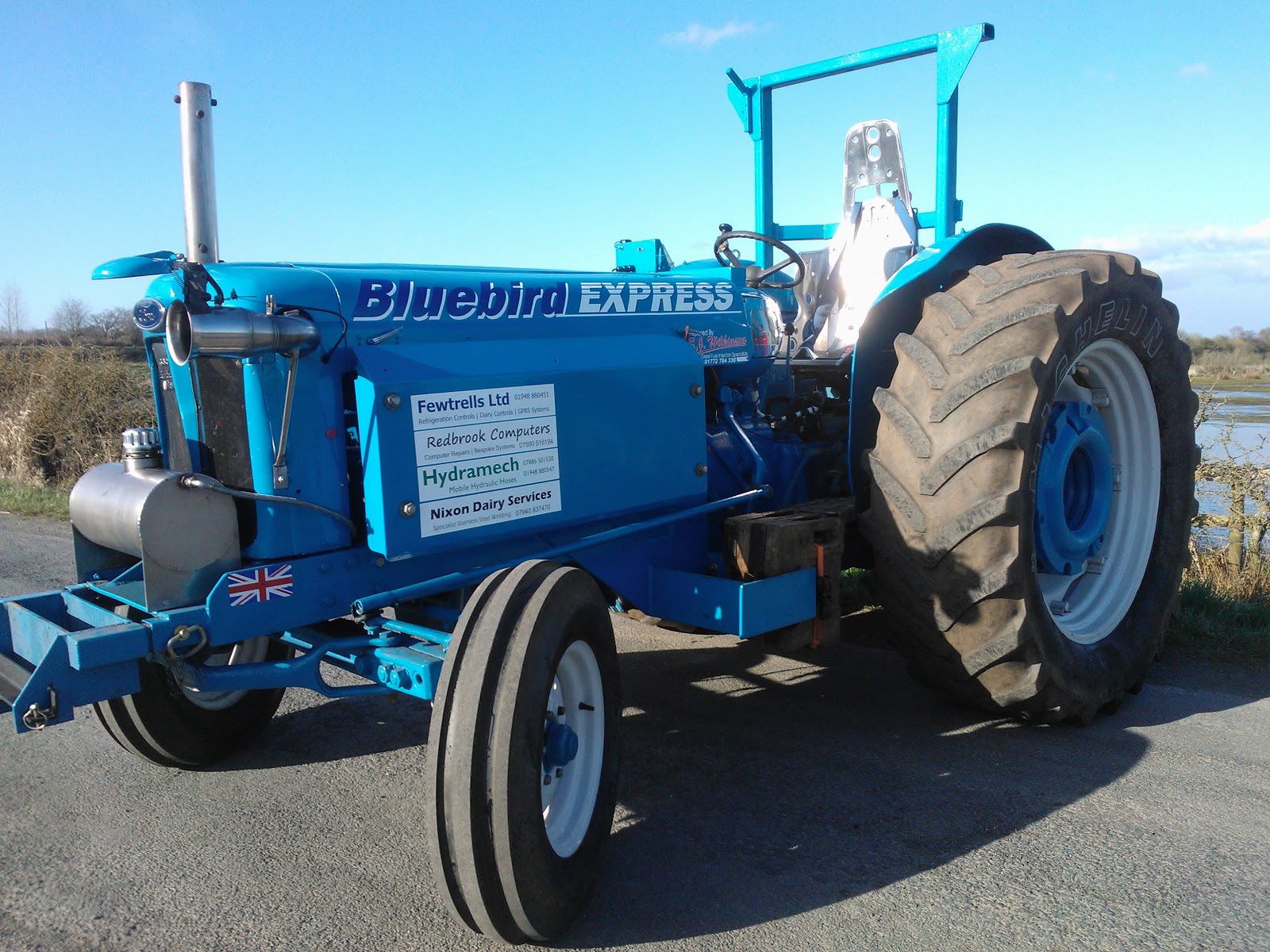 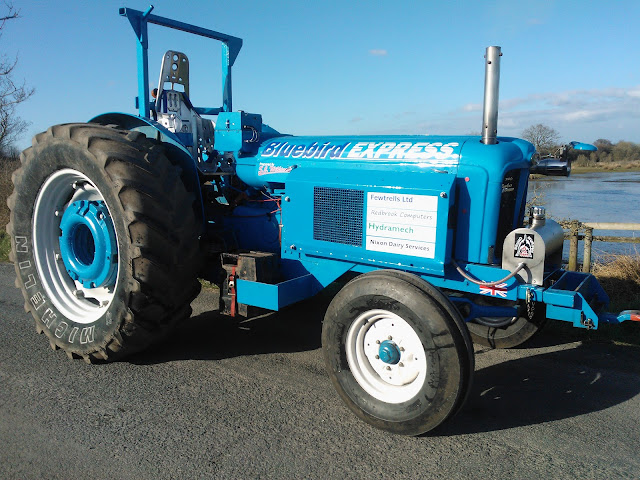 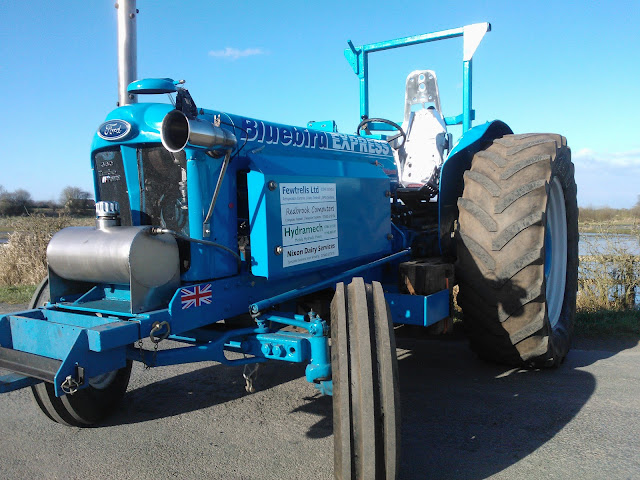 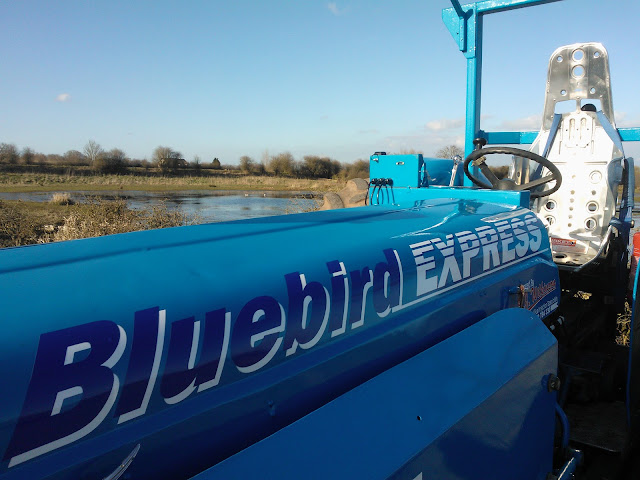 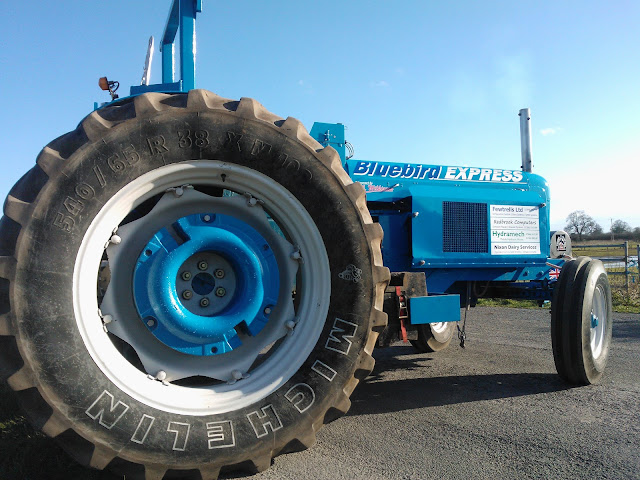 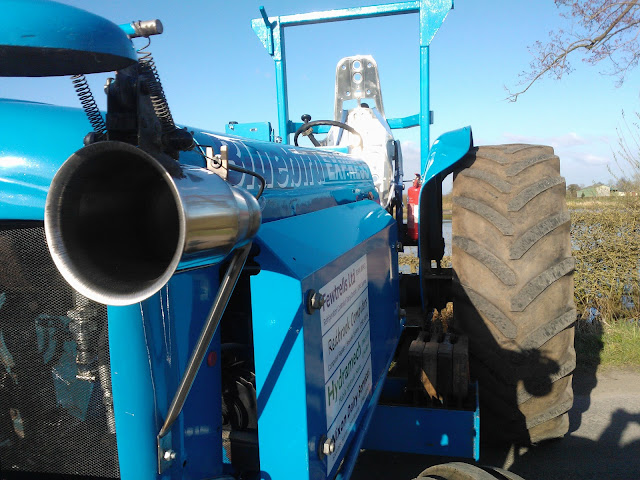 ﻿
Back soon with some naked photos. Err.., calm down ladies, photos of Bluebird Express we mean!
﻿
Posted by expresstractorpulling.com at 12:39 No comments: